First Day of Exploration in Beijing...

This morning we both woke up around 530AM, ready to go, not tired at all. We enjoyed slowly getting ready, with no rush, since we weren't scheduled to meet our guide till 9am. We also were able to Skype with the kiddos and tell them good night. For breakfast, we at the goods we bought at the market last night (strawberry yoghurt – with raw milk, we are hoping that's okay for our bodies to eat since they are not used to it raw- and a banana). Then we head down to the lobby to meet our guide and driver.

They take us to Tienanmen Square where we learn the history of the square and the surrounding buildings. One of which, is the building that the US president would come to if he were coming to visit China. While we are listening to Rocky explain the history, a woman, man, and little girl walked right up to us and ask to take a picture of us with the girl. We had heard before coming, that this would happen just because the kids don't get to see people that look like us very often. We did and then continued through the square and to the Forbidden City, which begins at the other end of the square. There were many guides and photo vendors around and we felt so thankful to not be bombarded by them due to Rocky being with us. If we had been on our own, they would've been hounding us while we were there. 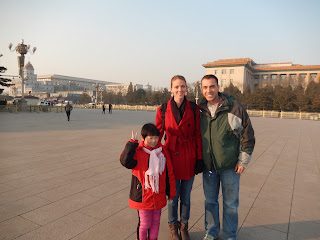 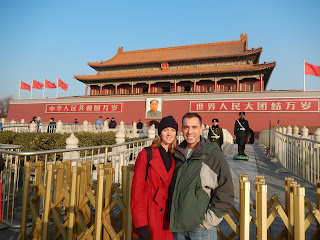 As Americans we tend to think of Tienanmen Square as just a place where students were killed by China military but the Square is really like the national mall in Washington DC, acting as like a courtyard to many important buildings in that area. Chairman Mao's body is kept in the building to the south, almost like the Lincoln Memorial. His body is brought up during the day for visitors to view and lowered in the evening to refrigerate. We never went in there but Rocky told us about it. The Square also has the most important flag in the country and is under guard 24 hours a day. Military presence in the area is very evident everywhere you look and each level of security is distinguished by different colors. Rocky told us that the square, just like the National Mall, is the area where people come to gather for large celebrations. It was great to learn that yes a tragedy happened here in this square, but many other important things happen here.

Forbidden City...Having read some about the Forbidden City before we left, we had a general idea of what it was but as with any very historical place, you can't really appreciate it until you are there. We were very fortunate to have Rocky as our personal guide through the FC and before we even entered the gates he began to give us lots of knowledge about it. The Forbidden City is where the Emperor of China and his family would live. This wasn't just a recently built area for the ruler of China within the past 100 years or so...this was hundreds and hundreds of years of emperors and rulers of China. We were about to be treading on the steps history that were behind walls that weren't opened to the people until the 1940s. Each wall that we passed and each courtyard that we walked through brought us deeper and deeper into the Forbidden City. As we went deeper, the history became richer. At first we were just blown away by the beauty of the FC, but then it hit us....we were fortunate enough to be going where hundreds of years of history happened. The emperors ruled from withing these walls. Decisions for the country of China were made within these walls, and this wasn't just a stroll by replica buildings as Disney. This was the real deal!!! History is amazing and the only thing I can compare this to because of how old it is, is walking through ancient Rome. Except in Rome, a lot of those buildings have deteriorated or no longer exist. This had everything, including the original still in its same spot throne that every emperor ruled from, it has the original garden with very very old trees, it has the old cauldrons where the Anglo French scraped gold from when they tried to conquer the city, it had the original stone courtyards. It was a crazy walk through time and we were so grateful to be able to see it with our eyes, hear the stories with our ears, and feel the history that wafting throughout the place. Without a guide it would have still been a beautiful amazing place to see, but to get the history behind it all was priceless. Seeing this beauty and experiencing this history was completely wonderful but also sobering at the same time. In order for this all to be built in 14 years, someone had to work hard. The work was done by slave labor and I'm sure with conditions that were not the best. While history is a beautiful thing, it's easy to forget the ugly side to it too. For this to be built the way it was built was a huge undertaking and one that was very costly.

After the city, Mr. Wu met us and took us to our next destination – Hutong tour via Rickshaw.
This was very neat to see the small houses and hutong alleys that connected them. We learned how to tell if a house was an 'ordinary' family or a 'more important' family. (based on how many steps led to the house and how many circles were above the door.) We also learned how to tell if the house belonged to a scholar or a military family. ( based on the object placed on both sides of the door – If a rectangle shape, it belonged to a scholar. If a circle shape, it belonged to military) We rode in the rickshaw while a Hutong guide rode his bike next to us. It was so great to get a glimpse of what common life looks like. These Hutong communities are how most of Beijing looked 30 years ago. Now in Beijing, there are more modern buildings and many skyscrapers. We finished the Hutong tour by going to a local family's house (consisting of a eating/living room, kitchen, and 1 bedroom) Most of the houses shared a courtyard with 4-10 other families. The family cooked us lunch and we ate with our Hutong guide in their eating/living room. They served us rice, chicken & mushrooms, pork & Celery and a potato/onion/garlic dish, along with hot tea and beer. It was SOOOOOO delicious!!!!! 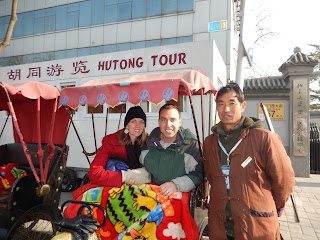 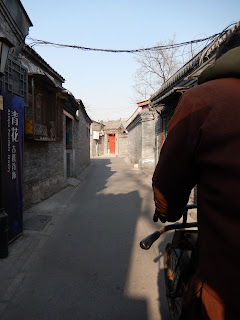 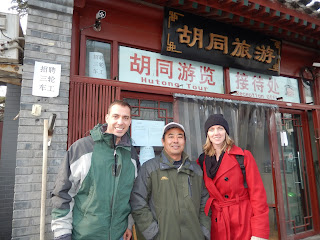 After the Hutong tour, we were driven to a Silk workshop. I (Brandee) really enjoyed this part. We were taken around to see silk worm cocoons and how they boil them to make the thread come off onto a machine that winds 8 cocoon threads together to make one strand. We learned that there are single worm cocoons and double worm cocoons. The single worm ones can be made into thread and used to make silk material. A double worm cocoon cannot be put in a machine, it instead has to be done by hand. They boil them and the a person takes out the worms and stretches the cocoon over a hoop. When many cocoons are put on the hoop together into a mat, this mat is dried and then stretched by 4 women (one on each side of a bed sized hoop) 50 or so of these mats are stretched to make the inner part of a quilt or blanket, which is then put in a cover. We learned that the silk can last 20+years and is washable with shampoo rather than laundry soap. Then they took us to a silk shop where we were able to buy Lucee and Lilee matching silk dresses for a great price.

After the silk workshop, we went back to our hotel for a nap before going to our evening outing, an acrobatic performance. This performance was out of this world! The kids would've LOVED to see this and we wish they were able to come with us. Words can't really describe the amazement we felt while watching this performance! We were amazed and in awe of how high, limber, and strong these performers were. To give a glimpse of what we saw, try imagining 11 people riding on 1 bike, a dancer standing on 1 leg-on her toes- on top of a man's head, men jumping through hoops higher than they are tall, and 8 motorcycles driving at the same time in a ball cage! This performance was about an hour long. Through many of the performances, I (Brandee) found myself with tears in my eyes with how proud I was to be adopting a child from a country with such performers as what we were watching.

Afterwards, our driver ( who sounds like a Chinese Mr. Kielchewski!)drove us back to our hotel where we found we were so tired. Ben fell asleep waiting to talk to the kids and I am trying to stay awake during this time, by typing this journal entry. It's 912 PM here and our in Milwaukee it is 712AM this morning. I'll sign off for now and get ready to Skype with them before going to sleep. So far, they are doing really well and we are so thankful for that.
Posted by Ben and Brandee at 7:44 AM