This morning we woke up and had yogurt and banana for breakfast. I guess I should go back to the fact that since Ben fell asleep so early last night, he woke up at 1am and couldn't go back to sleep. I woke up at 430 but was able to go back to sleep till 530am. We went running in the top floor gym, Ben ran a 5K, I ran/walked 3 miles. Then back to the room to eat breakfast and get ready for the day! We talked with the kids and heard all about their day. Every time we hear from Lilee, she says over and over, “I really want you momma and daddy! I really WANT you! “ So sweet and makes us miss them even more. Noah says he misses us lots and can't wait to be with us, he wants to jump through the computer to be with us. Gavin seems to care less, as long as he keeps busy with acting like a wild animal or playing with toys. :)

We met our guide down in the lobby at 9am to begin our adventures for the day. He took us first to the Olympic Village for a photo. We didn't have a tour, but were able to see the hotel towers (shaped like the Olympic torch and dragon) where the Olympians stayed, the Water Cube where Michael Phillips broke the record for most gold medals in any Olympics, and the Birds Nest. We hopped back in the van and drove next to the Jade Market where we learned to tell the difference between real and fake jade and tell the difference in quality, color, and design. I never knew that Jade comes in all different colors, including purple, brown, white, yellow, orange, blue and of course the famous different shades of green. While at the Jade place, we saw a couple that was on the plane ride from Chicago to Beijing with us. They sat on the other side of the plane and we didn't get to talk with them, but I wondered then if they were coming here to adopt. They had a young girl who was not the same ethnicity as them, which made me wonder. I went up to them and awkwardly introduced myself and that I had noticed them on the plane. They acted as though I was little crazy and that they didn't notice us on the plane. However, after a minute or two, the conversation was very natural and they asked us why we were visiting and that they were adopting an 18mth boy from China on this trip. We will more than likely see each other in Guangzhou with our additions to the family. Their embassy appointment is the day before ours and they fly home on the same day, but out of Beijing, rather than Hong Kong. They are from Nebraska.

After the Jade Market, we drove to the outer part of Beijing to visit a section of the Great Wall of China. This wall is over 4000 miles long stretching across China. It is the only man-made object that can be seen from outerspace. There are 6 areas that you can visit in Beijing. The one we went to was a very high part of the wall, Jutong Pass. Ben and I went up over 1600 stairs and then had to come back down the same way. What an amazing adventure! Words can't describe it and pictures can't portray it. It is definitely a destination that everyone should attempt to visit in their lifetime! We had envisioned ourselves on the wall before we left the US and now was the moment we were actually climbing the wall. Surreal for sure! Lord willing, we would love to bring Lucee and the other kids back here one day to hike it as a family. 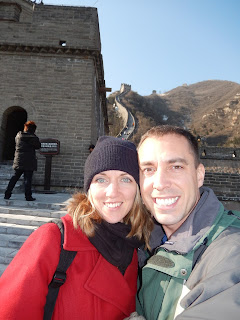 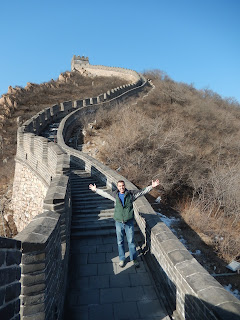 After the wall, our guide took us to take a photo in front of a fire station in Beijing. Then we took our guide and driver out to lunch at a local restaurant that is one of their favorites. It was delicious except for a flowery hot pepper that we carefully tried to dodge in one of the dishes. The spicy noodles, garlic broccoli and fried rice were yummy though! 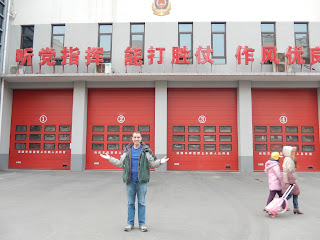 Then with full bellies, we were dropped off at our hotel for a 2 hour window (aka nap time) before going to a Kung Fu performance at the Red Theater. This performance was different then I thought it would be. I expected to see very disciplined martial arts, with stern faces. However, it was more like a play about a young boy who was trained to be a Kung Fu master. While he was a boy though we got to see a lot of spunk and personality, from not only this particular boy, but the other boys. They would smile a lot at the audience and their performance was extremely relational. Their movements were done with perfection. There were about 6 boys, 30 or so men, and 2 ladies in the show. The show was very well done and we know for sure that our boys would've loved to see this. 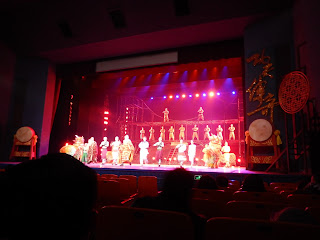 Our guide left before the show was done, due to the fact that he was riding his bike home and the theater was a 40 minute bike ride, rather than if he was to ride home from our hotel, it would've been over an hour bike ride. We got in the van with Mr. Wu and he drove us home to our hotel. By this point, we have come to appreciate Mr. Wu's 20+ driving experience and although there are moments of craziness, we feel like we are in great hands while in his van.

We got home around 930 pm, Skyped with the kids. For them, they have an exciting day planned since Mamaw doesn't have any daycare children in her home. They are planning to go to Chuck-e-Cheese and tonight, their cousins Seraphina, and Cherubelle are coming over for a sleepover. We on the other hand, are very hungry and tired. So, after our Skype date, we head down to the western restaurant in our hotel called Casalingo. We enjoyed a margherita pizza. Ben had a beer, and I had a ginger ale. Much to my surprise the ginger ale here is much more natural than the ones at home. I could actually taste the real ginger. Everything was delicious. We went to bed, excited for our “free” day tomorrow. The one day in Beijing without a guide, driver, or schedule.
Posted by Ben and Brandee at 8:38 PM