Today, we woke up and got ready for the day, and headed downstairs to eat breakfast before meeting our guide at 930am. We were headed to a silk embroidery workshop. Changsha is known for it's silk embroidery. We got to see the room where 40 or so women were working near the windows (for natural light, they don't work under the electric lights because it is harder on the eyes if it's not natural light). Ashley told us that they all drink green tea because it's supposed to be good for the eyesight. The artwork was so intricate and beautiful!

Then we went downstairs to the galleries where we got to see pieces as much as half a million US dollars! I think there were more expensive pieces but I didn't see their cost. There are 2 people at the workshop that are the only ones that know the technique to make a design on both sides of the silk. We saw 2 pieces like this in the galleries, one with a bald eagle in different positions on each side of the material and the other one was of a monkey on one side and a white crane on the other. I wish we could've taken pictures, but that was prohibited in this particular gallery. About half way through the tour, we noticed Lucee beginning to act very different from her cheerful self. She didn't want to be held and kept saying “booya!!” (which we were told is a forceful No!) it got to the point where Ben had to take her out of the building and I finished up in the gift shop area picking out gifts for our moms. When I came out off the building, I met Ben and Lucee (who was crying) ready to go. We weren't sure why she switched so quickly, was it because she couldn't touch much at this place, she was being told “no” when she tried touching the more expensive things, or that she was being held too much and just wanted to run around? We weren't sure. Ashley suggested that she might be confused why he is always with us on outings. She probably remembers him from the orphanage and perhaps feels like he might take her back? Something we didn't think about. So, we called it an early day and went back to the hotel at 11. We also found out that all of the kids in the orphanage have nap time from 12-2pm. The past 2 days she hadn't gotten or acted like she needed a nap... today might be a good day to get back close to her normal schedule.
We got into our room and ate lunch and then got her ready to take a nap. She completely melted down and didn't want to take a nap. She screamed and would push us away if we came near her. After about 10-15 minutes of this, we decided to turn on the lights, and let her just snuggle with us while watching TV in bed. She calmed down and snuggled between us for about an hour and a half. After getting up, we played and bonded some more. Then she pointed to the thermostat like she wanted to play with the buttons. I told her no and she melted down again. Full on yelling, screaming... Ben held her in cradle position and rocked her while she cried. Part of these meltdowns are because of the mourning process and although it was sad to be told no, we've told her no previously and this wasn't the response. We think this has more to do with the mourning process of losing the relationships and surroundings that she was so used to and being put into new surroundings with new people who look, smell and talk differently. We are using these moments to bond us closer together as we empathize with her. She came out of this and we went out to a play area on our hotel floor to get a change of scenery. We are all beginning to have a sense of cabin fever here with not much to do or see.
Tonight for dinner, we decided to go to the western restaurant downstairs to order a pizza. Unfortunately, we were ready to order at 430, but they didn't open up till 530. We killed time by walking around the hotel on the different floors. We are staying on the 30th floor, and there are many more above us, so we had some area to explore. When it came time, Ben put in an order for pizza, and when he got it back, only 2 of the 4 toppings were correct. It was still eatable though so we didn't complain. With being away from the tourist city like Beijing, there really aren't many people that speak English, and if they do, it's usually just a very small amount. So, the fact that we got pizza with 2 out of the 4 toppings correct is a bonus!

Well, with this day being different than the other two, we weren't surprised that the night wasn't going to go as smoothly as the other 2. she ended up screaming when we put her in bed and would calm down a bit when we'd switch spots. I'd lay next to her, and then Ben, and I'd lay next to her and then Ben. Eventually she had calmed down all the way and fell asleep. We had learned to scoot the bed over to the wall so she couldn't fall off the bed. However, we didn't put her in a diaper (cause she didn't want to and hadn't had an accident at all since being with us, so we didn't want to fight another battle if we didn't think we needed to) and that turned out to be a mistake. About 2 in the morning, I woke up to the smell of urine. She had peed the bed :( But she was sleeping so soundly, we decided to just deal with it in the morning. What a day... 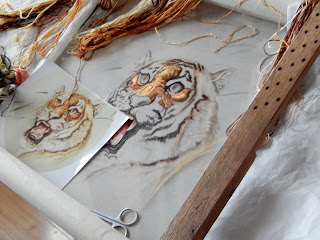 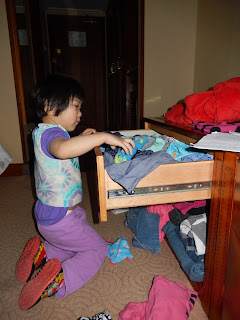 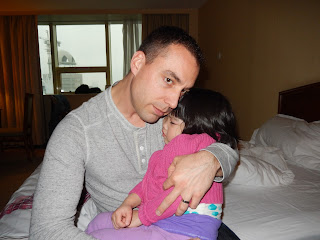