*** FYI - All families who adopt from China have to go to Guangzhou to complete the adoption process.  Also, you pronounce it like Gwong Joe :)

Today we got up and got ready for the heath exam. I made sure to pack a sucker (for after her TB blood draw – they do a blood draw to test for TB rather than the usual test of giving a shot and checking 2 days later for a reaction... the blood draw is generally more accurate than the shot.) and toys to occupy her time as it could take up to 2 hours being there on a busy Saturday morning. We went down for breakfast and were shocked to see tons of American families with adopted children! We had to of seen at least 14 families sitting and eating breakfast with their kids. It was comforting, but also we wanted to talk with each one of them and hear their stories. We found out later that there were 2 large groups of families ( one group of ten families and another group of seven families) that were traveling together. We saw the family that we met at the jade factory in Beijing and talked with them to see how things were going. They were surprised by the fact that their 18month boy that they adopted seemed to have never left his crib while in the orphanage. He would go stiff when held at first and didn't make eye contact. She said that after a few days, they have seen progress in his interaction with them.

After breakfast, we met Jack in the lobby. We drove to the clinic and had Lucee's photo taken for the visa and then went upstairs to a packed waiting room. People were waiting in lines with their children. There were 4 rooms that each child had to go into. It seemed like our guide knew just what to do, because other families had been there for over an hour and we only ended up being there for about 20-30 minutes. We had her hearing tested, her temperature/weight/height taken, a doctor checked her body to make sure all was healthy. He seemed shocked that she could walk on her own without any device to help her. Then the last room was the blood draw. They thankfully don't let the parents go in. We waited outside and she emerged screaming and crying. I held her till she calmed down and then we left. Jack came up to our room to get all the paperwork that we brought from Changsha. He would be organizing it and looking over it to prepare everything for the interview on Tuesday at the Embassy. He noticed that the documents had a gap in them. They said that she was found at the hospital 6 days after her birth, but that she didn't go to the orphanage until 5 months later. He said that the Embassy might not be okay with that information gap and that he would find out where she was for those 5 months. Come to find out, she was in the hospital during those 5 months because it was better for her to be there with her condition as a small infant than at the orphanage. After 5 months, they moved her to the orphanage where she could be cared for until we picked her up 4 years later.

We ate lunch in the room and decided today was the day we'd try for a nap. We began by praying for her and asking God to help us have patience and her to understand we love her. I took her potty and laid in bed with her, telling her in Chinese as best as I could, we are going to sleep. She began screaming and trying to get out of bed. I just kept holding her and saying, “It's okay, we're going to rest.” over and over. After about 30 minutes of her resisting, she finally calmed down and fell asleep. After she was asleep for 5-10 minutes I turned on the tv and watched '50 First Dates' with Ben while she laid in my arms fast asleep. It was like a mini date for us and we soaked it up. She slept for the entire movie and then woke up in a wonderful mood , laughing a lot and giggling with us. I took her to the play room in the hotel (MUCH better than the one in Changsha!!!) while Ben worked on homework in the room.

Then we went to the Mexican restaurant, which was very yummy. The only disappointing thing about it was they didn't serve chips and salsa like most do back in the states. :(

We got back to the room and I gave Lucee a long bath while I washed clothes in the sink. She enjoyed playing with an empty water bottle and the rubber ducky that the hotel gave her. Our other kids would love this bathtub! It's in an enclosed area that they could splash all they want and the water just runs down the drain. A kids splashing heaven. :) Lucee enjoyed it too! Then we all went to bed around 8pm with no battles or meltdowns... yes, the nap is something we need to make sure she gets most days from now on. :) 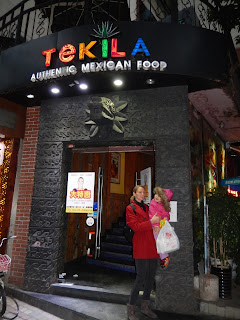