Jan 25 - Guangzhou Zoo and Playing with other newly adopted kiddos...

Today we didn't have to meet the guide until 1030am to go to the Guangzhou zoo. We wanted to let the sunshine warm up the day a bit before heading outside. Today is the only day it's supposed to be sunny while we are in Guangzhou... it's also been a week since we've seen the sunshine, and a week since getting Lucee! Hard to believe it's been a week already. In a way it feels like much longer.

It seems like each day we meet the guide a bit later, and each day we sleep in longer. We ended up getting down to the breakfast area at 10am and only had a half hour to eat. We got Lucee her usual yogurt, banana, lemon muffin, and this time she wanted a boiled egg. She wanted it in Changsha too, but didn't eat it, so I was doubtful that she would today, but she ate everything!

We met Jack, our guide, in the lobby and went in the van to the Guangzhou Zoo. The weather was still sunny and in the 40's. It felt great and Lucee loved seeing the animals. It was great bonding time, as she would say the animal name in Chinese and we'd say it in English. Then she'd repeat it in English and make the animal sound. She really seemed to love the monkeys and liked the Elephant. We were a little disappointed that the Panda bears were inside their hut and the glass around them was kind of foggy so we couldn't get a very good view of them. We stayed there for about an hour and a half and then left. We wished we could've stayed longer to see all of the zoo, but I think the guide didn't want to push it with the weather being colder and it almost lunch time.

We ate lunch in the room and laid down for a nap. This time, Ben and I laid down with her, but she never fell asleep, she just laid there quietly for an hour. After an hour the door bell rang from a worker at the hotel who needed to change out the beverages in the little fridge. Oops guess we forgot to put the do not disturb light on. Oh well, it worked out to our advantage as she was still happy, but will end up falling asleep quicker tonight for us to hang out after she goes to bed.

Ben had a test online that he had to finish today, so I took Lucee to the playroom while he worked on it. In the play room, we met 2 other families adopting. One from Montana and another from New Hampshire. It's so easy to think that the way Lucee acts is how all children adopted from China act, but just like all kids, each one is so different. Lucee wanted nothing to do with the clothes she got from the orphanage, but one of the girls we met in the play room didn't want to go anywhere without at least one layer of her orphanage clothing on. Also the other 2 kids wanted to eat constantly and their parents were dealing with having to limit the food for them, where as we haven't heard Lucee tell us that she's hungry ever and until recently barely eats anything.

After about an hour and a half, we went back to the room to check on Ben. When he was done with the test, we all walked around to go to the Thai restaurant (it ended up not being far at all, just across the street on the 5th floor of a shopping mall we never went into). We were a little apprehensive with going since Lucee didn't have a nap and wasn't quite acting as happy as she has been. We were worried she would have a meltdown in the restaurant. As long as she was sitting with Ben, she was fine and we were able to find her a noodle and veggie dish that she loved. Ben had a green curry chicken dish, and I had a chicken and garlic dish. Mine was good except the chicken had lots of bones and fat in it... I really miss the boneless skinless chicken chunks that are served with the meals back home. Ben's curry was delicious (a little too spicy for me, but still great!) and we had these little flat tortilla like sweet bread things that we all super enjoyed!!! On the way home, we stopped at a Turkish dessert shop and each picked out a dessert. Lucee seems to be understanding us more and more. She wanted to eat the cake right away, but we told her that we were going to eat it in the room and she seemed to get it and didn't throw a fit (like she would've in the earlier days). She really enjoys riding on Ben's shoulders and this was the way she went home. The weather was still pleasant and we really wished the weather was like this or even warmer while we were here.

We got back to the hotel and enjoyed eating the desserts. Then we put Lucee to bed (she fell asleep within 10 minutes) and we got up and spent time together, which was the first real quality time in a week! That night we didn't get our usual 10 hours of sleep, but the time spent together was well worth it. Lucee seemed to toss and turn a lot in the middle of the night as well. But all in all, it was a good nights sleep. 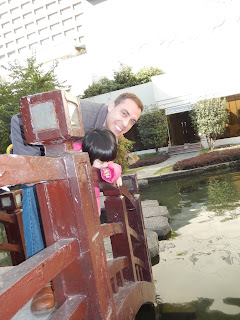 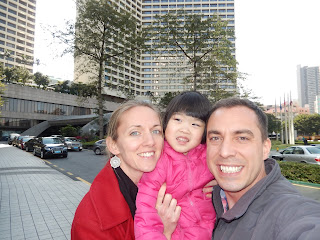